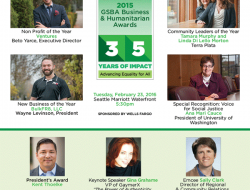 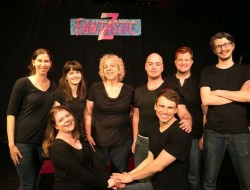 Newcomer “The Lady B” steps in to host Gay City / Three Dollar Bill’s annual Oscar Party at the Cinerama after Robbie Turner exits the event due to RuPaul’s Drag Race obligations.

Due to contractual obligations with LOGO TV, ROBBIE TURNER, the scheduled star and host for Gay City Health Project/Three Dollar Bill Cinema’s big annual Oscar Party at the Cinerama, has had to pull out of the event. The popular local diva is a contestant on Season 8 of RuPaul’s Drag Race which premieres on March 7, 2016.
But, the Oscar Party will continue, on Sunday, February 28th, with a new host and a name not quite as familiar…up and coming new queen, THE LADY B will assume hosting duties for the big annual event and fundraiser. She has big shoes to fill: Robbie Turner, Jinkx Monsoon and Cherdonna Shinatra have all been hosts in the past. This diva is best known for her gigs at trendy new club, Kremwerk and is one of several exciting newcomers who call that club their home base.
More from the press release:

The organizers of the 11th Annual Academy Awards Party are pleased to announce that The Lady B, a Seattle drag and dance sensation, will be taking over as host of the event. The party, a benefit for Gay City and Three Dollar Bill Cinema, was recently forced to find a new host due to the cancellation of their original host, Robbie Turner.
Turner, a star in the upcoming season of RuPaul’s Drag Race, was apologetic about the need to cancel. It was necessary, however, due to unforeseen obligations as a result of Turner’s contract with LOGO TV, the home of RuPaul’s Drag Race.
But the show must go on, and this show will thanks to The Lady B.
Story-teller, performance artist, community organizer, and activist, The Lady B uses burlesque, dance, drag, and spoken work to portray how the politics of race, sexuality, gender, and ability are projected onto us.
“I am so happy to be asked to host the 11th Annual Academy Awards Party,” said The Lady B about joining the event. “Gay City and Three Dollar Bill Cinema are important to support because of their on-going dedication to Seattle’s diverse queer communities as our needs evolve.”
“It is truly an honor,” she adds, “standing in support of these two great pillars of our community.”
The 11th Annual Academy Awards Party will take place at the amazing Seattle Cinerama on Sunday, February 28. Guest will enjoy the Academy Awards broadcast on their giant screen in their well appointed theater. The party will provide a glamorous Hollywood experience, with savory hors d’oeuvres, a no-host bar, an Oscar Ballot contest with door prize entries, and, of course, a fabulous Oscar raffle.
There will also be an exclusive VIP experience, with the best seats in the house reserved just for VIP guests! VIP tickets include a special VIP bar featuring complimentary champagne service (while supplies last), VIP only hors d’oeuvres, and complimentary coat check. Only 100 VIP tickets will be sold.
Don’t forget to take a moment and cast your vote for Gay City and Three Dollar Bill Cinema’s 2nd Annual Rainbow Cinema awards,recognizing and honoring the incredibly diverse talents of actors and filmmakers from 2015. The winners will be announced at the event. Votes can be cast at: http://www.threedollarbillcinema.org/news/entry/vote-for-the-2016-rainbow-cinema-awards
Visit the event’s Stranger Tickets page to purchase tickets, or find more information: https://www.strangertickets.com/events/30651636/11th-annual-academy-awards-party