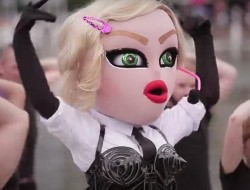 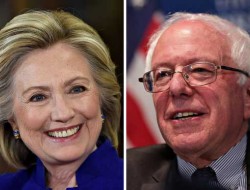 Thousands of Seattleites stood in a line that looped from KeyArena, around the International Fountain, and all the way to the Space Needle in the far southeast corner of Seattle Center on Sunday afternoon, to gain a chance to see Democratic presidential hopeful, Senator Bernie Sanders rally the voters for next Saturday’s Washington State Caucus.

In Seattle, Sanders addressed a crowd estimated at 5,500 people outside of an arena where he spoke to a crowd of more than 10,000 people inside the arena, offering his prescriptions to rebuild the middle class.

“Please come out Saturday morning,” Sanders implored one of his audiences here, referencing the start time of the Washington caucuses. “Bring your friends, your neighbors, your uncles, your aunts.”

Meanwhile, Former Secretary of State and First Lady, Hillary Clinton is bringing the entire “Team Clinton” to Washington today and Tuesday in her bid to secure the Democratic nomination for president. Her husband, former President Bill Clinton will appear in Spokane and Vancouver, Washington on Monday, while daughter Chelsea Clinton will appear in Tacoma and Seattle on Tuesday, including a fundraising luncheon hosted by several Seattle restauranteurs, including Linda Derschang, Molly Moon Neitzel and Ethan Stowell.

Mrs. Clinton will jet in Tuesday for stops in Everett and Seattle, and a sold out $2700 a ticket fundraiser at the home of Jeff & Susan Brotman, (as in the Brotmans who own Costco.)

And, the Washington State Democratic Caucus is this coming Saturday, March 26, 2016….Go here to sign up !