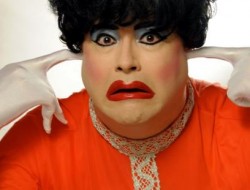 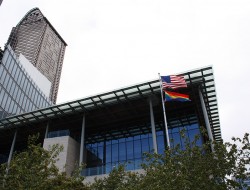 Irish drag superstar/political activist PANTI BLISS comes to Seattle to promote her film “The Queen of Ireland” this week.

Yes, the one and only PANTI BLISS, the Irish drag queen and political activist is headed to Seattle this week to promote her film, THE QUEEN OF IRELAND which screens this Thursday, June 2nd at AMC Pacific Place at 7 pm and at 12:30 pm on Saturday June 4th at The Uptown. Grab tickets here!

A leading drag performer and AIDS/Queer Rights activist for many years, “Panti” aka Rory O’Neill made international headlines in 2014 when the star made comments on Irish television about rampant homophobia in Ireland’s journalist/media community. “PantiGate” led to massive changes in Ireland including passage of marriage equality last year. The ensuing media storm made Panti an international figure for LGBTQ rights.

More on Panti and the film:

Meet Pandora “Panti” Bliss: part glamorous aunt, part Jessica Rabbit; a court jester whose role is to say the unsayable; a figurehead for LGBT rights in her home country of Ireland; and one of the world’s great drag queens. The Queen of Ireland follows Panti’s epic journey from growing up gay as Rory O’Neill in the small town of Ballinrobe to the birth of her drag persona in the clubs of Japan. Upon returning to Ireland in the ’90s, Panti was instrumental in setting up several notorious fetish clubs as well as the outrageously entertaining “Alternative Miss Ireland”—a vitally important fundraiser for HIV and AIDS causes. In reaction to her home country’s endemic homophobia, Panti became—in her own words—an accidental activist, penning the “No More Mr. Nice Gay” blog while also publicly stating on Irish national television that members of Ireland’s journalism establishment were unashamedly homophobic. The furor over this last incident became known as “Pantigate,” which garnered her the support of hundreds of thousands—including Stephen Fry, RuPaul, Dan Savage, and Madonna—and would subsequently set the tone of the campaign for Ireland’s historic referendum on gay marriage. Throughout this amazing cinematic portrait, Panti Bliss narrates her life and times with flamboyant humor and tender poignancy.

Director Biography
Irish director Conor Horgan started his career as a photographer before breaking into the world of motion pictures. After directing over 70 commercials, his first short film The Last Times (2002) was screened and took home multiple awards at the Cork International Festival. The Queen of Ireland is Horgan’s first feature documentary.

Panti and Conor Horgan are scheduled to be in attendance at both of these screenings as well as at a reception at Gordon Biersch located in the fancy food court across from the cinema in Pacific Place, 600 Pine Street at 9 pm. Go here to register to attend that event.