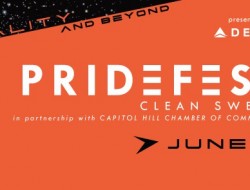 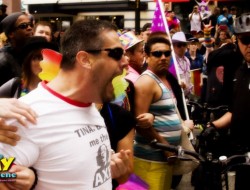 The cast and creators of the Tony Award winning Broadway musical hit, “Kinky Boots” have teamed up to produce this fantastic video in support of Transgender Equality and the right to use the restroom that matches your gender identity. The co-creators of the musical, Harvey Fierstein and Cyndi Lauper have rewritten the lyrics to the finale of the show, “Just Be,” changing them to “Just Pee” to express their support for the transgender community nationwide but especially in states like North Caroline where legislation has been passed that bans trans people from using restrooms matching their identity.

With the video, which features the current cast of the show on Broadway with Fierstein and Lauper, Mr. Fierstein also released the following statement:

“So, you don’t like transgender people? Have the balls to honestly say it. Today’s bathroom controversy is fueled by the same bigots that sought to ban gay and lesbian teachers forty years ago. All these years later they’re still hiding behind the claim that they’re only protecting their children. These discussions are great opportunities to educate and strengthen the bonds that make us all one human family. But when I see discussions on social media proposing a men’s room for adult males, a ladies’ room for adult females, a little girls’ room for little girls, a little boy’s room for little boys and then another pair of bathrooms for little boys with a parent and little girls with a parent… Well, it’s time to take a step back and laugh at our own absurdity. This video is a reminder that sometimes we go to the bathroom just to pee.”

Learn more on how you can fight I-1515 at the “Washington Won’t Discriminate” website.