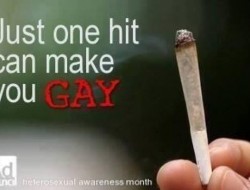 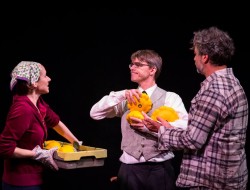 We’re in the dog days of summer and theater options are few and far between this August in Seattle; very few new productions are opening this month…maybe all the theater companies took a vacation in preparation for the 198 shows opening in September? I dunno.

One theater group you can count on to present new work in the late summer is Sound Theatre Company. July/August has been their usual time to present back to back productions every year, usually taking over the Center House theater space where Seattle Shakes and Book-It are the primary tenants for 10 months out of the year. This year is no exception with their just recently wrapped production of Stephen Adly Guirgis’s The Last Days of Judas Iscariot and their just opened production of Richard Bean’s clever retelling of Carlo Goldoni’s 1746 farce, The Servant of Two Masters which was a huge hit in London and NY,  retitled as One Man, Two Guvnors, which also made a huge star out of its lead, James Corden who won the Tony Award and subsequently snagged the hosting gig at The Late Show on CBS.

Bean’s version of the classic commedia dell’arte work was transplanted from 18th century Italy to 1963 Brighton England but still centers on the Harlequin character here named Francis Henshall and the trouble he gets into as he attempts to work for two different bosses/masters/guvnors. One of them, Stanley Stubbers is on the lam for killing his girlfriend’s gangster brother. The other is actually that girlfriend, but in disguise AS the dead brother. Because it’s a farce, naturally the disguised girlfriend never runs into her boyfriend…and, she also has to deal with an arranged engagement to the rather dim Pauline who wants to marry her real fiance Alan, a frustrated ham actor who vows to seek revenge on…

Well, you get the picture. Kooky characters in a kooky far fetched plot with lots of mistaken identities, slamming doors, slapstick and silly wordplay. And…

It’s fantastic. Richard Bean’s very clever version of the original Goldoni play is brilliantly written, and full of wit and charm. It’s the best comedy script I’ve seen produced in years and I question why theater companies still insist on trotting out the very tired and inexplicably popular but bloated mess, Boeing Boeing, when they could be staging THIS play instead. It’s a charming treasure. And, because it’s actually a very recent work, I’m rather surprised the “Big Houses” (ACT and Seattle Rep) let this slip through their fingers. For reasons unknown, they consider The Mystery of Love & Sex and Luna Gale better plays? Oh, dear…

Their loss is Sound Theatre’s gain. Sound has probably a tenth the amount of money to spend on a production that ACT or the Rep does, but they’ve done a fantastic job mounting this play. It’s a strong production with terrific design work (a clever and flexible set by Burton Yuen), and an engaging cast well directed by Ken Michels. One Man, Two Guvnors is the perfect late summer treat…light, charming and funny as hell.

The show itself is very good but the glue that holds all of it together is the main character of Francis and it takes a strong comedic talent to pull it off and be the anchor for the entire show. Fortunately, Sound cast the divinely talented David Roby in the role and he not only steals the show, he manages to make off with a large chunk of Seattle Center in the process. (See? There’s David Roby running down the street with the Space Needle shoved down his pants…) Mr. Roby is a gifted clown and he very ably commands that stage with every skill required for this role: physical clowning, sleight of hand, word play, improv…he’s just amazing at all of it.

But, he has talented support as well including some very deft work from Luke Sayler as the thuggish Stanley; Kayla Teel as the disguised girlfriend, Rachel Crabbe and most of all, Daniel Stoltenberg as the ham handed jilted fiance, Alan. There’s also inspired classic commedia clowning from Henry James Walker as the elderly waiter, Alfie and Andrew Scott Bullard in a variety of ensemble roles.

I’m only going to give this production a couple “dings”. The opening scene was a bit sluggish which was partly the fault in the fact this production has recast two male roles with female actors. Now, I understand the need and desire for theater companies to be more inclusive to female actors who have to cope with the hard cold fact that there tends to be more male roles available in plays than female ones. I sympathize. And, I support gender blind casting…when it doesn’t harm the play. But, changing the gender (but not the names) of two of the supporting characters made for considerable amount of confusion at times since they didn’t (and can’t legally) change actual dialogue or they would violate the terms of the contract they sign to produce the playwright’s work. So….I understand the motives here, but this choice does affect the work. If gender parity was important in this case, then it might have been wise to just produce the original play by Goldoni where as a work in the public domain, it can be produced, cast and altered in any way a company wishes. Just a thought. (And I should point out that there’s absolutely no need for these characters to be any specific gender. If it WERE possible to slightly alter names/dialogue without offending the playwright, it wouldn’t be an issue. In fact, having those two roles be female actually works better for the “commedia” aspects of the play since commedia centered on stock roles which were usually male/female pairings.)

But, a bumpy opening scene doesn’t mar the entire production. Sound Theatre’s One Man, Two Guvnors and its brilliant central performance by David Robey, are must see comedy treats. You have a limited time to check them out.