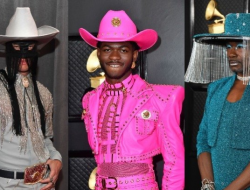 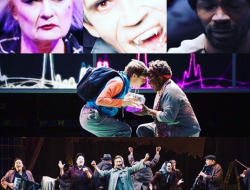 Review: “Reparations” Gets All “Timey Wimey” About A Serious Subject

It’s a World Premiere for Sound Theatre Company to kick off their 2020 theatrical season at Langston Hughes Performing Arts Institute with REPARATIONS a new drama from playwright Darren Canady. It’s a “timey wimey” play that pays multiple visits to different times but all at the same Oklahoma farmhouse.

It opens not in our present but “The Near Future” where the technology exists to enable people to make metaphysical visits to points in the past. In the opening scene of Reparations, we meet a young Black woman named Rory accompanied by a state government agent named Pramesh who are in the cellar of her family’s home to investigate her claim for reparations from the State of Oklahoma for wrongs committed against her family as the result of slavery and decades of systematic racism.

With the aid of some rather odd looking gear that looks like it might have been swiped from an episode of Dr. Who (too big to be a sonic screwdriver; it’s more like a big sonic hero sandwich…) Pramesh sends Rory’s conscience (but not her physical being…I think) back to 1922 when members of Rory’s family were savagely attacked and lynched from a tree in the yard. Since the sonic sandwich records this info (I guess) this will help form a case for Rory to be paid reparations which Rory desperately wants so she can escape her life in the tiny rural town she’s lived all her life.

But, there are others to consider, including her bitter old Grandma Billie Mae who owns the farm, and her cousin Maceo who thinks it a big mistake to bring up painful memories of the long ago past. And, when the state manages to rig the system in their favor to keep from making a payout to Rory, she takes matters into her own hands by (improbably) stealing the Sonic Hero Sandwich equipment and forcing Maceo to examine an incident from their family’s past that impacts him as well, a 1961 love triangle gone bad that included his own grandfather.

So, there’s a lot of “timey wimey” stuff in this place, which makes it more furn and “hip”….it really does feel like it’s trying to riff on the kinds of stories told in TV anthology shows like The Twilight Zone or Black Mirror. And, that succeeds to a certain degree but…not fully because we do have issues with plot holes like:

So, yeah, there are quite a few questions raised by the plot. But, to be honest, they don’t derail the play. They do need worked out, but Reparations does have its charms, mainly with the strength of the characters and the central dramatic plot thread centering on this family’s long history. Rory, Maceo, Billie and the rest of the family are rich, full characters and Darren Canady has done a superb job of making them come to life. I think it’s just the “gimmick” stuff that needs some work as well as maybe a bit of cutting here and there; there are repetitive moments at times where we’re given the same pieces of information over and over.

The cast does a fine job of helping create those characters with strong work from Aishé Keita as Rory and Tracey Michelle Hughes as Grandma Billie and newcomer Brandon Mooney playing cousin Maceo as well as other family members. They all seem to connect as family members here; it’s a believable cast of actors inhabiting these roles.

I will critique the scenic design here from Lex Marcos, a local theater artist whose work I’ve much admired in the past. I think the design here is trying too hard to create literal physical sets for each location with the result the stage feels cluttered which then impacts the direction and staging by Jay O’Leary. The fullness on stage leads to some awkward placement of actors as well as losing the sense we’re moving through different periods of time.

But, I think the strengths of the play and this production out weigh the negatives. Reparations has a lot of things going for it. It’s very much worth checking out…if you can snag a ticket. It’s been selling out.