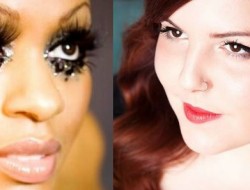 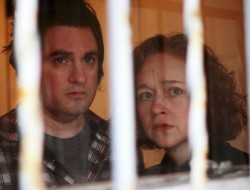 ACT Visits “The Avuncular Queen” With “The Legend of Georgia McBride” Timothy McCuen Piggee and Adam Standley in ACT’s production of THE LEGEND OF GEORGIA MCBRIDE onstage through July 2, 2017

I visited ACT twice this weekend for two VERY different productions…one is an intimate family drama/thriller and the other is…a big tacky gay sitcom. We’ll visit the intimate drama in another post but for now, the “big tacky gay sitcom” in the room is ACT’s main stage production of a popular work making the rounds of regional theaters around the country. It’s Matthew Lopez’s gaudy comedy THE LEGEND OF GEORGIA MCBRIDE and it’s a rather astounding follow-up to his previous work, the critically acclaimed Civil War drama “The Whipping Man” which examined slavery, racial issues, and Jewish identity in 19th century America. (Taproot did an excellent production of this play three years ago). “Georgia McBride” is a completely different kettle of fish; a crazy contemporary Southern fried comedy about a sweet but irresponsible Elvis impersonator working in a seedy bar in a seedy beach town in the Florida panhandle who ends up doing drag in order to pay the rent and support his pregnant wife. Only problem is: he fails to tell his wife what he’s doing for a living.

This is a silly, silly play…light and fluffy and tawdry. It’s a cheap polyester boa wrapped around some rather broad caricatures. As a gay man, I did find it a trifle condescending…it’s yet another “gay story” that centers on straight characters adapting gay personas for the benefit of straight audiences. It’s “Will & Grace” meets “Kinky Boots”. The two gay characters in the play are both drag queens and we only see one of them out of drag once and they have no lives outside of being “gay and outrageous and fierce”. The main drag character acts as a wise old mentor to the young immature straight leading character. If “The Magic Negro” is an archetype in art and entertainment, then so too is “The Avuncular Queen” who chastely yet bawdily guides the clueless straights under their tutelage. It’s a bit annoying, as a gay man, to sit through material that is so clearly meant to entertain non-queer audiences. There were MANY gay people in the audience of “Georgia McBride” on opening night and more than one of them seemed to be “eye rolling” at some of the material onstage. I know I was.

That said, The Legend of Georgia McBride is very entertaining…it does earn most of its laughs. It’s heart is mostly in the right place. None of the characters in the play display homophobic tendencies. Our leading man, “Casey” does fail to tell his wife that he’s earning a living as a drag queen but he’s not mean or hurtful about it; he realizes that his sense of shame is his own and not because he has hatred for gay people. His fear is about his own discomfort about worrying what others will think about him, especially his wife and his journey to own up to that is the major through line for “Georgia McBride”. Playwright Matthew Lopez is gay and while I can fault him for the play’s more pandering moments, he’s careful not to create characters that are stereotype redneck bigots out to “kill the fag” which so frequently feature in most works about drag queens in “fish out of water” situations. There’s no “Beat Up The Homo!” scene in this play. The characters all have good hearts.

It also helps that the five actors in “Georgia McBride” are very, very good. Jeff Steitzer does his usual bombastic but friendly turn as the blustery bar owner Eddie; as always, Mr. Steitzer is a comedy gem. So is Charles Smith in two roles as the sweet neighbor/landlord to the main character and then as a messy drag queen who inexplicably specializes in Edith Piaf when not lecturing clueless straight men about Queer Politics and History. Nastacia Guimont is adorable as Casey’s more practical better half, the pregnant Jo…it’s not much of a role in a show dominated by big broad drag queen shenanigans but she gives the character heft and dimension and loads of charm.

But, it’s our two principle characters who dominate this play…the sweetly clueless Casey and the motormouth drag tank Miss Tracy who teaches him a lesson or two about not only being a great performer but how to be a better more responsible human being as well. It’s not that surprising that Adam Standley is once again just superb in the leading role of Casey; the actor has demonstrated time and time again that he is very good at playing comedy and is equally at home with musical theater and since this role requires expert comedy skills as well as live musical theater chops, it’s not a big surprise he’s the chief reason to see this silly play. It’s a warmly endearing performance and full of energy and vitality.

As for “Miss Tracy” it just seemed logical to director David Bennett to cast that big drink of water known as Timothy McCuen Piggee in the role…after all, Mr. Piggee has played a drag role before, in the rather messy and unfortunate Dan Savage written “Miracle!” produced at Intiman five years ago. The actor was rather stiff and not at all convincing in a similar role as a matriarchal drag diva in that play (and couldn’t walk in heels…) but he’s apparently been studying episodes of “RuPaul’s Drag Race” for the last five years because he’s deliciously loose, free and divatastic in this production. Aided by Pete Rush’s over the top costumes and Dennis Milam Bensie’s messy trashy diva wigs, the actor creates a delicious fully realized character. Yes, it’s a little too much like the diva Lola in the musical “Kinky Boots” but that’s the playwright’s fault…Mr. Piggee’s richly lush “Miss Tracy” is a down on her heels Lola; not as polished but a whole lot wiser and street smart. It’s a very funny performance and Mr. Standley and Mr. Piggee make a delightful comedy team.

And, really, it’s the actors, the corny old story with its corny jokes and the overall charm of the characters that propel this show into something that can be great fun. And, while I did chuckle several times and even “LOL” on an occasion or two, I didn’t adore this play like 85% of the audience seemed to on opening night. This is very much a crowd pleasing show and I get that. It’s not really “my” show…it’s a mainstream comedy for the masses. If you love broad comedy and terrific performances, then it’s a good fit for you. But, for some queer audiences it might be a trifle problematic or at least raise an eyebrow or two.