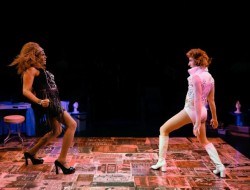 ACT Visits “The Avuncular Queen” With “The Legend of... 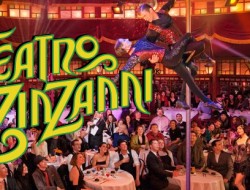 The OTHER new play opening at ACT this weekend (see my review for the other new play, The Legend of Georgia McBride) is actually produced by Theatre 22 the exciting newish small theater company founded by actor/director Corey McDaniel that produces edgy contemporary plays including this one, (which is almost a world premiere…) It’s the brand spanking new Theresa Rebeck play, DOWNSTAIRS a taut family drama which ventures into thriller territory.

It concerns a troubled man named Teddy who has just moved in on his older sister Irene and is crashing on her basement couch while he “pulls himself together”. Teddy is a twitchy type who seems to be dealing with a lot of issues that include various forms of mental instability that includes paranoia while also dealing with probable homelessness. Irene is torn because she really does care for Teddy but her domineering husband Gerry does not and he’s pressuring her to kick out her brother. Over the course of most of the first act, Irene and Teddy initially clash but also start to bond after years of estrangement. Both care about the other and gradually as they spend time together they start to realize they each have things to offer each other. Teddy really is dealing with some serious issues, which are similar to issues suffered by their deceased mother and Irene starts to realize that many of the things that Teddy is saying about her problematic relationship with her sinister husband may have some basis in fact…or, maybe not.

You can’t get too specific about plot elements in Downstairs (SPOILERS!) but needless to say it is a gripping family drama with elements of an old school thriller (Is Teddy delusional about Gerry or is Gerry really a “demon” or…both?) The intimate scenes between the brother and sister are beautifully done; there is a lovely sense of the two rediscovering each other as family and friends. And, the more confrontational scenes have a terrific crackle and electricity to them. Ms Rebeck has done a great job of creating dramatic tension with the writing and director Julie Beckman does an equally strong job of staging those moments. There are times in the middle of the first act as the brother and sister start to reconnect that the focus gets distracted and wanders off course…I think Ms Rebeck needs to tighten up some of the middle of that act (ie: Irene’s rather long description of mailing packages is a tad…meandering) And, the end of the play does feel a bit….tidy? Things are wrapped up a bit too tightly and neatly in a very short period of time.

Again, Ms Beckman’s direction is on point here with a nice contrast between the very cozy conversational scenes between the siblings and the tenser moments involving the husband Gerry. She’s aided by a trio of superb performances from all three actors. Brandon Ryan’s talent at playing odder characters is to his advantage here obviously…Teddy is a twitchy, larger than life character but Mr. Ryan does an excellent job of keeping Teddy within the realm of reality. His Teddy is obviously suffering but he always seems very real and grounded; you see Teddys out in the real world all the time, tentatively existing on the boarders of stability/instability. There is much humor in this lovely performance but also much pain.

Likewise with Christine Marie Brown as sister Irene who is quite different from Teddy…an understated, quiet and pensive personality with great warmth but one who has been beaten down by elements in her life. Ms Brown is also very comfortable in this role…she slips into Irene’s beloved green pea coat with great ease and her ever changing relationship with Teddy just feels very organic and real. There is great chemistry between these two actors and their scenes together are very true and very powerful. Her scenes with Teddy contrast nicely with the different dynamic with husband Gerry which are fraught with aggressive oppression.

While his role isn’t as well developed, John Q. Smith still offers up a strong and commanding performance as Gerry. He’s the spoiler in this trio, the mystery man who seems to exert great power over his wife. He has fewer scenes in this play but Gerry’s presence hovers throughout the entire work. It’s a menacing role regardless of the outcome of the story; is Teddy building up Gerry to be a Bogeyman he really isn’t? It’s maybe one of the faults of this play that the answer to that question is rather quickly revealed; there’s not a lot of ambiguity. Regardless of that lack of mystery, Mr. Smith is very good at playing that menace. We’re used to seeing the actor playing shaggier characters, bearded and unkempt but here his Gerry is all clean cut middle management cold brusqueness and it’s all the more terrifying…a booming menace in well ironed Dockers.

The tech and design work is strong here, too with an appropriately dingy basement set by Robin Macartney and subtle atmospheric lighting by Gabrielle Strong. It’s nice to see a “real” set in ACT’s Bullitt Cabaret space. Many productions there opt for dull simple sets; this is a fully realized production.

Downstairs has a bump or two in it but overall Theresa Rebeck’s drama has an interesting premise and fully realized characters, at least with the brother and sister characters. The powerful emotional arc to the story of the two siblings is well done and the thriller aspects add some delicious tension to the proceedings. Ms Beckman’s expert direction and the excellent acting of all three actors make Downstairs another winner for Theatre 22 and ACTLab. It’s worth checking out.