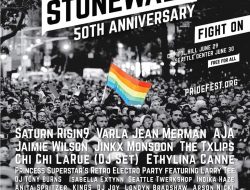 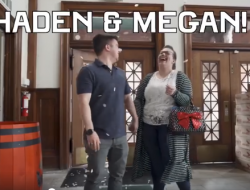 The Lucky Couple To Get Married By “Queer Eye”...

Five Senses Reeling Announces Line-Up for “Stand Up For Pride” Five Senses Reeling production company has announced their show for Seattle Pride Week…in past years they’ve focused mostly on drag events but last year they also did a popular comedy show with Fortune Feimster and they return to the comedy well for their only big show for this Pride season with STAND UP FOR PRIDE which will be produced in Seattle on Thursday, June 27th but also in Boise, Idaho for their Pride Weekend on June 12th (for Boise area readers go HERE to snag those Boise tickets.)

The Seattle show will take place at the Egyptian Cinema on Capitol Hill and you’ll have two shows to choose from, one at 6:30pm and one at 9:30pm. $1 of each ticket sold will go to support Seattle PrideFest who produce the free Seattle LGBTQ Pride festivals on Capitol Hill on Pride Saturday, the big Sunday Pride event at Seattle Center. Grab the tickets to the Seattle show HERE!!!

Stand Up For Pride will feature both national and local comedians with MATTEO LANE (who we just featured in a story on Penguin brand pride clothing HERE) and Sabrina Jalees, Patti Harrison and Caitlin Weierhauser. Local comedians Bobby Higley and Woody Shticks will also perform.

Thursday, June 27th
Doors 6 pm Show 6:30 pm
Doors 9 pm Show 9:30 pm
Meet & Greet is combined for both shows and held at 5 pm.
Tickets are $25-50 with a separate $30 meet & greet with Sabrina, Patti, and Matteo which can be
combined with any ticket level.
https://www.fivesensesreeling.com/stand-up-for-pride

Matteo Lane is a New York-based comedian whose stand-up special can be seen on Netflix’s The Comedy Lineup. He has performed stand up on The Late Show with Stephen Colbert, Late Night with Seth Meyers, Comedy Central’s Adam Devine’s House Party, This Week at the Comedy Cellar, and The Comedy Jam, as well as HBO’s Crashing. Fluent in five languages and with a singing range of six octaves, Matteo lived in Italy as an oil painter and opera singer before starting his comedy career.

Poised to become the most visible working trans comedian in America” (Rolling Stone), Patti Harrison will make her feature debut in Paul Feig’s thriller STARTER in 2018 and is recurring as “Renee” in season 2 of TBS’s Search Party. Her appearance on The Tonight Show (in response to Trump’s attempted transgender military ban) started a media firestorm and she is now a recurring contributor at the show. She’s served as staff writer for Jax Media’s Reductress Hour and for Seriously.TV, and has hosted and produced segments for Billboard, Comedy Central, and Viceland. She is currently a staff writer on the upcoming AMC series DISPATCHES FROM ELSEWHERE and will next serve as a consultant on HBO’s HIGH MAINTENANCE.

Recently Patti has been profiled in The New York Times, Vulture, Splitsider, VICE i-D, A.V Club, Paste Magazine, BUST Magazine, and was named one of Vulture’s 20 Comedians to Watch for 2017.

Sabrina is a Canadian Pakistani comedian, keynote speaker and writer based in Los Angeles and has a strong following as a stand-up touring across multiple continents. Right now, Sabrina is a writer and executive story editor for ABC’s The Mayor. Sabrina was a recurring guest on Comedy Central’s The Nightly Show with Larry Wilmore and developing the next iteration of her web-series How Many Questions with Comedy Central’s digital arm. She has also appeared on Last Comic Standing, Best Week Ever, and Adam Devine’s House Party. She is an incredible advocate for gay rights, racial diversity and speaks to living honestly as you can see from her inspirational TED talk. Sabrina can be seen on Transparent on Amazon and she recently finished writing on NBC’s Crowded and Powerless.

Caitlin Weierhauser is pretty fun. This Los Angeles, by way of Portland, comedian serves up coach vibes and delightfully unhinged enthusiasm. Often political, frequently personal, and entirely too tantrum-prone, Caitlin delivers arguments with equal parts glee and rage. They give the worst news about society with a dimpled grin and pointed outbursts.

Caitlin has appeared at JFL New Faces 2018, The Benefits of Gusbandry (Amazon Prime), and will be in the upcoming Disney+ movie, Timmy Failure.

Bobby Higley is wild eyed, sassy, gay ex-Mormon, middle child of 7. Fashionable, dark, and deeply irreverent, picture Mr Martha Stuart as played by a Sassy Stoner Twink, post prison. Bobby has been a participant of both the Midwest and Portland Queer Comedy Festivals, Mutiny Radio Comedy Festival, as well as the Altercations festival in Austin.

Bobby is a recurring personality on Cut Casting, and his youtube videos have gotten over 18 million views.

Like you, dear reader, Woody Shticks grew up a competitive handbell ringer in a Puritan cult in the New Jersey Pine Barrens.

These days, Woody Shticks is a stand-up storyteller and flesh peddler based in Seattle, Washington. Five-time Bawdy Storytelling favorite, one third of The Libertinis, and forty pounds of fun in a two pound sack, he’s been hailed as “razor-sharp” by Seattle Star, “comedy gold” by BroadwayWorld, and “too gay to book anything but children’s theatre” by his college acting teacher.

Woody unashamedly harnesses the unruly subject of sex – the good, the bad, and the ugly – to confront power and privilege while getting to the bottom of respectability politics. Uncovering our basest parts is dirty work, but a little fruit makes it all easier to swallow. Never frozen, usually sweet, and always fresh, Woody invites conversation and incites collaboration to bring warmhearted weirdos out of the shadows and into the streets.

Woody has taught master classes at Seattle FringeCon and Intiman’s Emerging Artist Program, headlined Intersections and the International Dublin Gay Theatre Festival, and produced new theatre and dance in New York, Seattle, Portland, and on his childhood waterbed. Woody will bring his solo shows Schlong Song, Maniac, and Who Cares! to anyone with a bare stage and thirst for shenanigans.