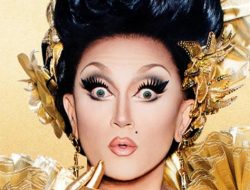 It looks like this all happened awhile ago (June 18th) but it’s just getting a release today. Seattle’s Capitol Hill Housing group announced new plans for their LGBTQ senior housing project project that has been in the works for several years. You might remember our story on the last version of the project from September of 2017 when CHH announced plans to build a senior LGBTQ building at 14th and Union. That project fell apart but CHH has continued to seek out a new location to fulfill that dream.

In the last few months, an ideal new spot presented itself; a property owned by Seattle Central College adjacent to Neighbours Night Club on Broadway between Pike and Pine was swapped for Capitol Hill Housing’s plot located up the street between Seattle Central’s main campus and the new light rail station. It was a move beneficial to both parties with Seattle Central gaining land that immediately bordered its existing holdings and CHH gaining a prime location closer to the heart of LGBTQ Capitol Hill.

Last month, Capitol Hill Housing found a non-profit tenant to anchor the new housing unit: Generations Aging With Pride aka GenPRIDE a non-profit providing programs and services to older LGBTQ adults will be headquartered there and provide programs that will serve not only the residents living in the 90+ units onsite but the community as a whole.

Pending funding from the city’s Office of Housing, the project is scheduled to break ground in December of 2020.

More from their news release:

We’ve got some big news.

You may have heard that, in partnership with nine LGBTQ-serving organizations, we are building the first LGBTQ-affirming affordable housing for seniors in the Pacific Northwest. Guiding this effort is an Advisory Committee that includes Generations Aging with Pride (GenPRIDE), the Ingersoll Gender Center, LGBTQ Allyship, Country Doctor, Gay City: Seattle’s LGBTQ Center, POCAAN, the Greater Seattle Business Association (GSBA), and Seattle Counseling Services.

The past six months have been busy as the Advisory Committee has navigated a site change to Broadway between Pike and Pine and the selection of a ground floor tenant: GenPRIDE. Focused on empowering older LGBTQ+ adults to live with pride and dignity, GenPRIDE promotes, connects, and develops innovative programs and services that enhance belonging and support, eliminate discrimination, and honor the lives of older members of the LGBTQ+ community.

The move to Broadway – originally, the building was to sit at the corner of 14th Avenue and East Union Street – brings better access to more amenities, including the Capitol Hill light rail station, and more visibility for the services that GenPRIDE and others will provide. If this project is funded by the Seattle Office of Housing this fall, we plan to break ground in December 2020.

With 90+ affordable apartments at 60% at or below area median income, a main goal of the project will be to create an anchor for a community at risk of displacement – one that provides health and social services to residents as well as community members not living on site. In addition to becoming its headquarters, GenPride will oversee space on the ground floor to serve community-determined needs.

“This housing project is significant for many reasons—the need for affordable housing is essential, especially for our LGBTQ elders. Many of us have been displaced to far-flung areas in the region where isolation and limited access to services creates more risk to our health and well-being,” says Steven Knipp, GenPRIDE’s Executive Director. “It is also important for us to reclaim Capitol Hill as the LGBTQ+ historic center—and placing this building right in the heart of the neighborhood sends a clear message that we are still here.”