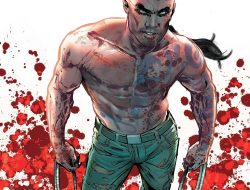 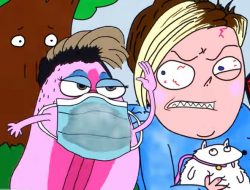 Wojnarowicz: F**k You F*ggot F**ker is the name of a new documentary about legendary queer artist/writer/photographer and gay rights/AIDS activist David Wojnarowicz (pronounced “voy-nah-roh-vich”) who you’re probably aware of if you’ve taken any kind of Queer Studies class in college (or, if you’re old and been around a long time…) but for those who aren’t aware, he is a major, major name in queer rights activism even today.

This award winning documentary from director Chris McKim and Executive Producers Randy Barbato and Fenton Bailey (also producers of “RuPaul’s Drag Race”) is opening nationally right now, though various film festival and art house cinema websites and you can check it out via our own SIFF website starting Friday, March 19th. Go HERE to purchase your ticket!

Included in the film are many images of David’s incredible art work and photography including that iconic photo with his lips sewn shut.

They’re also releasing a soundtrack album on World of Wonder Records. AND, you can check out a live Q&A with the director Chris McKim on March 30th…go here for that info.

Wojnarowicz: F**k You F*ggot F**ker is a fiery and urgent documentary portrait of downtown New York City artist, writer, photographer, and activist David Wojnarowicz. As New York City became the epicenter of the AIDS epidemic in the 1980s, Wojnarowicz weaponized his work and waged war against the establishment’s indifference to the plague until his death from it in 1992 at the age of 37.

Exclusive access to his breathtaking body of work – including paintings, journals, and films – reveals how Wojnarowicz emptied his life into his art and activism. Rediscovered answering machine tape recordings and intimate recollections from Fran Lebowitz, Gracie Mansion, Peter Hujar, and other friends and family help present a stirring portrait of this fiercely political, unapologetically queer artist.

Chris McKim is an Emmy winning documentary filmmaker & TV producer. Starting his career at Miramax Films, he once hit Harvey Weinstein in the head with a door. He helped create the hit series RuPaul’s Drag Race as show runner and EP of the first 4 seasons. In 2016 he co-directed & produced the Emmy-winning documentary Out of Iraq and most recently directed & produced Freedia Got a Gun which was selected for the 2020 Tribeca Film Festival along with Wojnarowicz.