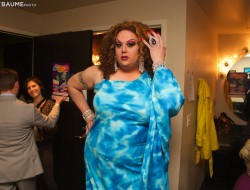 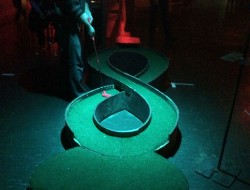 You know the gays: they never met a fertility rite they didn’t like.

This weekend saw the fourth annual Easter Bonnet contest at CC’s. It was a gathering of the best and the biggest of Seattle’s headgear, and domes were piled high with Easter grass and flowers and stuffed animals and the occasional tub of Crisco.

And in the spirit of the season, proceeds benefited Imperial Sovereign Court of Seattle’s Lady Graytop Scholarship Fund. (Giving is part of the spirit of Easter, right? Along with resurrection and rabbits and fancy hats. Sure, why not.)

DonnaTella Howe hosted the proceedings, and was more than up to the task of overcoming a few technical hiccups. When the sound system was unable to carry over the sound of the crowd, she abandoned the microphone and quieted the throng by cupping her hands to her mouth and hollering “EVERYBODY SHUT UP.” Yes ma’am. After the contest, Jack explained that his orange creation took just three hours to whip up that morning out of cardboard and some spare fabric. He’s an experienced costumer, having created fabulous ensembles for Burning Man and Solstice. (His best work, it must be said, involves nudity and body paint. He was happy to share photos, so if you see him around town, say hello.)

Happy Easter, everyone! Jesus would be proud.

Editor’s Note: The Lady Graytop Scholarship Fund was mistakenly attributed to the Sisters of Perpetual Indulgence-Abbey of St. Joan in a previous published draft of this post. That excellent scholarship fund is actually run by the Imperial Sovereign Court of Seattle. This foolish mistake was made by Mr. Strangeways and not the original writer of the post, Mr. Baume. Apologies to all for the dumb error.