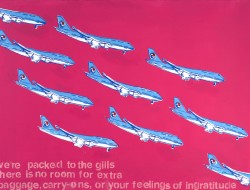 Darius X Shares His Tales As A Transgender Korean... Miss Robbie Turner is a contestant on Season 8 of RuPaul’s Drag Race on LOGO TV.

Apparently, her “broken” ankle magically healed and she spent her recuperation period in West Hollywood. Seattle drag superstar ROBBIE TURNER was “RuVealed” to be a contestant on Season 8 of RuPaul’s Drag Race Monday night during the airing of LOGO TV’s NewNowNext Awards. She joins 11 other queens in this year’s competition (filmed last July/August) which will begin airing on Monday, March 7, 2016 on LOGO.

Ms Turner earned quite a bit of ridicule for her overly elaborate and not at all convincing excuse for being out of town for filming. It was alleged she broke her ankle in a car accident…the weekend before filming began. She also briefly used crutches for a couple weeks upon her return in mid August in an apparent effort to “prove” the story was true.

Robbie is the 3rd (or 4th, depending on who you ask) Seattle entertainer to appear on the show. Jinkx Monsoon won Season 5. BenDeLaCreme finished 5th on Season 6 and won Miss Congeniality, while Magnolia Crawford, who was identified as Seattle based on that season, actually lived in Southern California. She was the 2nd queen eliminated that season.

Several of the names had been long rumored to be on Season 8 thanks to the “Nancy Drew” snooping of fervid fans who tracked down leads and carefully monitored rumored queen’s social media. Acid Betty, Kim Chi, Thorgy Thor, Derrick Barry, Bob The Drag Queen and Robbie were all expected to make the final cut, but a couple names on here are big surprises including Laila McQueen.

And, it’s also a surprise that there are only 12 contestants this season. The previous 3 seasons have all featured 14 cast members. It’s been speculated that there could be fewer episodes this season OR episodes where there will be no elimination. THE BEST OF LUCK TO MISS TURNER!