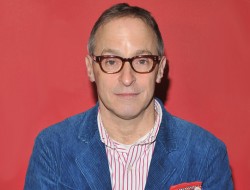 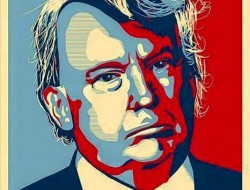 Kurt B. Reighley aka DJ El Toro in the highly photogenic men’s room at Pony. The DJ and his husband are leaving Seattle for the cheaper charms of Tucson. Photo: Kelly O

One of Seattle’s Queer Power Couples is leaving town next week.

Popular KEXP disc jockey Kurt B. Reighley aka “DJ El Toro” and his husband, acclaimed artist/designer Mark Mitchell are packing their bags and moving to Tuscon, Arizona…and, Seattle isn’t very happy about it. The couple have a huge circle of friends as well as fans and many people are mourning their move which the couple is admitting is happening partly due to the increased cost of living in Seattle. Both Kurt and Mark have candidly stated that the rampant gentrification in recent years coupled with the inflation that goes along with it, has prompted their move to a smaller city with a cheaper cost of living.

Kurt/El Toro had his final show on KEXP last night and as he multi-tasks packing up his life for the big move, prepping for his farewell gig at Pony on Sunday for his final “World’s Tiniest Tea Dance” as well as looking forward to the return of his husband who’s been in Beirut, Mr. Reighley kindly agreed to chat with us about The Big Move, Queer Music Icons, Saying Good-Bye to Seattle/Hello to Tucson and our mutual admiration for everyone’s favorite go go boy, James Darling.

Michael Strangeways: Last night was your final KEXP show…how are you coping? Are you still verklempt?

Kurt B. Reighley: I’ve been choked up in general since Election Night. Assembling and airing my final KEXP show, and reading all the kind emails from listeners that poured in, coupled with all the memories, definitely made it hard to speak in complete sentences.

When I was a young homo in Virginia (my formative years) and Indiana (college) in the ’80s, I yearned to hear and see more LGBTQ individuals in music. It blows my mind that 30 years later, I get to “be the change I wanted to hear.”

I looked back over my choices this morning, and felt such joy that KEXP listeners were so receptive to hearing so many voices from our tribe.

MS: Who was the Queer Artist for you that sort of signaled “Oh…shit. Things are changing!!”

KBR: I can think of a few. As you might have heard me say at the end of the show this week, of late PWR BTTM give me so much hope for the future. When I was a teenager, I never dreamed there’d be a badass band of young trans individuals that made GREAT music and connected with such a big, enthusiastic audience.

Seeing Klaus Nomi sing backing vocals with David Bowie on SNL was a huge epiphany. The mere fact that someone like that could be on national TV inspired me.

I do feel very fortunate that I came of age during the British Invasion & “120 Minutes” heyday. Marc Almond, Jimmy Somerville, Pete Burns … they all gave me courage.

MS: My not so secret goal is to get Seattle Pride to bring Jimmy Somerville to Seattle one year.

KBR: Freddy (DJ King of Pants) and I always dreamed of a Pia Zadora, Elvira, Julie Brown triple bill for a Pride Tiny Tea Dance. On Twitter, Julie suggested we bill our dream show “She Works Hard for the Money.”

MS: I like that idea! And, Elvira and Julie would both be game…not sure if Pia would, but it doesn’t hurt to try!

KBR: Pia Zadora’s actually been really sweet to Freddy and me on Twitter, which has brightened many a Sunday afternoon for us. Now if I could just convince Toni Basil to tweet. MS: Going back to what you said earlier about the unfortunate election results…that’s some bad timing. The drama/trauma of moving PLUS dealing with the election. At least, once you actually have to physically DO all the crap involved with moving, it might help take your mind off our current and future horror.

KBR: Yeah … the moving’s been a little more stressful than I anticipated, but I do resort to packing boxes when I can’t sleep or think straight.

I’m still super-excited about my new adventures in Arizona. I said I wanted to move someplace where Mark and I could potentially have a bigger impact on our environment, and we’re definitely gonna get what we wished for!

MS: Arizona is pretty conservative (though that’s slowly changing too) but Tucson is quite liberal with a big LGBTQ community. What are you looking forward to in Tucson?

KBR: After 20 years of being cold and damp, I’m excited to be hot and dry. Also, they have an amazing community radio station, KXCI, that reminds me a lot of WHFS (the free form station of my teens) and pre-Seattle Center KEXP.

University of Arizona also has the Institute for LGBT Studies, which hosted the kickass 2016 Trans*Studies conference earlier this year.

MS: Ok…what makes you NERVOUS about the move…scorpions? A lack of sushi?

KBR: What makes me nervous? Hmmm …I believe it’s important to get out of your comfort zone and test your mettle as an individual, and a big move to a new part of the nation definitely requires that – which is scary. I’ve gotten pretty adept over the years at turning fear into inspiration. I’ll definitely be the new kid in town but I’m lucky to have a few longtime friends already living in Tucson, and a lot of friends-of-friends who’ve reached out via social media to welcome Mark and I already.

MS: Other than PEOPLE, three things (or so) you’re really gonna miss in Seattle.

Also, Seattle still has an embarrassment of independent record stores. Portland, too. Tucson has a few, but not the smorgasbord of options I’ve been spoiled with for 20 years.

Plus there’s still good thrift shopping and junk sales in Arizona. And, as I’m reminded as I pack carton after carton of vinyl, I’m not exactly wanting for more records … but there’s always something nifty and weird you’ve never seen or heard before. I love the thrill of the hunt!

MS: Speaking of Pony…Sunday you’re saying “farewell” to Pony with one last “World’s Tiniest Tea Dance”Does Tucson have anything comparable to Pony?

KBR: I haven’t explored Tucson’s queer bars yet, so I can’t answer with authority. I’m eager to spend some time meeting people and finding out what’s already happening on the queer social scene, and then figure out what DJ El Toro can bring to the party that’s special.

MS: So, what DO you have planned for your final (for now) Tea Dance at Pony on Sunday?

KBR:Like my last show on KEXP, I’m selecting music for the “Last Dance” pretty methodically, although there will be more spontaneity because a) that’s the PONY way and b) SOMEBODY has to keep King of Pants in check.

There are certain songs that I identify very strongly with coming into my own as a young gay man (“Coming Out of Hiding” by Pamela Stanley, “I Am What I Am” by Gloria Gaynor, “You Spin Me Round (Murder Mix)” by Dead or Alive) so I’m excited to play all those records one more time.

MS: Shit…with you gone, Freddy’s REIGN OF TERROR WILL BEGIN!!!!

KBR: I’m sure Freddy and the PONY family will continue to do amazing things on Sunday afternoons, and I’ll always be with them in spirit. (“What’s that musty smell?” “Oh that? Eau de El Toro … we can’t get it out of the place.”)

But I’ve also had a couple songs stuck in my head since the election that I want to play, and songs I’ve grown to love because it’s such a joy to watch James Darling go-go dance to them (Marlena Shaw’s “Touch Me in the Morning,” just about anything from the Eurodisco LPs by The Three Degrees). I know James is a person, but he’s my favorite dancer ever and I’ll miss him a great deal.

MS: Well, James IS a Darling!

KBR: James just brings such humor and joy to his dancing. He’s an integral part of the World’s Tiniest Tea Dance and my special muse. He listens to the lyrics and responds through his movements, and interacts with Freddy and me.

MS: So….Who do you think will crack first in suggesting a Seattle visit…you or Mark?

‘Cause we’re assuming y’all WILL be making visits…right?

Especially around mid July or so when it’s 110 in Tucson.

KR: If my last big move (from NYC to SEA in ’96) is any indication, there will be a fair amount of back-and-forth, especially in the first few years. But I also wanted to move someplace cheaper so I could afford to travel again. Who knows which cooler climes we’ll choose when we want a break?

MS: Kurt, Thanks so much for taking the time to chat with us!

And, the best of luck to you and Mark on your new great adventure!

You can wish Kurt (and Mark) a fond farewell this Sunday afternoon from 4 pm to 9 pm at Pony for DJ El Toro’s final (for now) “World’s Tiniest Tea Dance with DJ King of Pants, James Darling on the pole and a live performance from Adé .