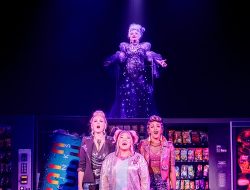 “Every ballet company in the world wants a work by choreographer Crystal Pite.” –The Guardian

SEATTLE, WA – For EMERGENCE, the penultimate program of its 45th season, Pacific Northwest Ballet brings back two audience favorites and the Seattle premiere of a powerful new work. The trio of blockbusters includes Crystal Pite’s mesmerizing Emergence, her stunning vision of hive intelligence; and Alejandro Cerrudo’s cinematic Little mortal jump, a work by turns playful, potent, and poignant. The program’s premiere is RAkU, PNB’s first work by Yuri Possokhov, whose tale of desire and loyalty captivates with its character portrayals and intriguing design layered with digital projection. EMERGENCE runs for seven performances only, April 13 through 22 at Seattle Center’s Marion Oliver McCaw Hall. Tickets start at $37. For more information, contact the PNB Box Office at 206.441.2424, in person at 301 Mercer Street, or online at PNB.org. [Audience advisory: RAkU contains themes of sexual violence.]

The line-up for EMERGENCE will include:

Little mortal jump, resident choreographer Alejandro Cerrudo’s tenth piece for Hubbard Street Dance Chicago, is a bubbling blend of different styles and genres that distills into a fluid, cohesive whole. As a dance, it fuses the technicality of movement, the theatricality of the stage, and the dark humor inherent in relationships. As an experience, Cerrudo aims to transport his audience—to “make them forget what they did today, and what they will do tomorrow,” he says. From cubes that serve as frames and obstructions to diversely characterized couples to vastly contrasting music, Little mortal jump is layered with unexpected twists and turns. This work is a step in the evolution of Cerrudo’s choreographic style, of which he says, “I challenge myself to create more complex works and to do things that I haven’t done before.” [Notes courtesy of Hubbard Street Dance Chicago.]

RAkU is a story about love and separation, desire and jealousy, violence and grief, told by choreographer Yuri Possokhov to stunning effect. Based on the true story of the burning of Kyoto’s Golden Pavilion in 1950, RAkU is set in a much earlier time and in a style similar to Noh theater, which presents the essence of a story rather than a literal depiction. Possokhov’s imaginative approach to the story, a commissioned score, and the dramatic projection-based scenery combine to make a perfectly melded artistic whole, telling the story of a princess, her warrior husband, and a monk.

Despite its Japanese story and setting, RAkU contains no traditional Japanese dance or music; Possokhov is more interested in tone, aesthetics, and visual inventiveness than in reenacting history. Combining folk-based steps and butoh (a post-World War II Japanese dance form utilizing extremely slow movements) with classically based movement, he makes every emotion in the ballet visual and vivid. And although the commissioned score by Shinji Eshima is symphonic and uses no Japanese instruments, it conveys a Japanese feeling, and one section incorporates a Buddhist chant. [Notes (excerpted) by Cheryl A. Ossola. Ms. Ossola’s notes for RAkU were originally written for San Francisco Ballet in 2011 and have been revised by the author for Pacific Northwest Ballet. For Ms. Ossola’s complete notes, visit PNB.org.]

Crystal Pite is known as one of the most innovative and exciting choreographers at work today. National Ballet of Canada artistic director Karen Kain commissioned Pite to create an original work for the company as part of a program of new work by Canadian choreographers. The result, Emergence, brought audiences to their feet and went on to win four Dora Mavor Moore Awards for Outstanding Production, Outstanding New Choreography, Outstanding Performance and Outstanding Sound Design/Composition by Owen Belton.

A riveting dark-hued work that casts a swarming, scurrying group of dancers, insect-like, in an eerily subterranean universe, Emergence dramatizes through its mesmerizing choreographic attack the ways in which the instinct for creating social forms seems hard-wired into life itself. Pite’s inspiration for the work came from reading Emergence: The Connected Lives of Ants, Brains, Cities and Software by American popular science theorist Steven Johnson and considering parallels between the social organization of bees and the hierarchical nature of classical ballet companies.

Johnson’s statement that “simple agents following simple rules could generate amazingly complex structures” became a touchstone for the piece. Pite was interested in individual expression and in collective problem solving through movement, often favoring the visual and kinesthetic appeal of the eccentric over the mundane and the grotesque over the beautiful. Pite rarely works with dancers en pointe and was attracted not only to the dancers’ ease of movement but also to the potential for a creature-like effect.

Key to Pite’s vision for Emergence was her collaboration with composer Owen Belton, who uses both acoustic and electronic instruments, often in combination with computer processing techniques, to arrive at atmospheric palettes of sound and tone. Pite and Belton incorporated drone-like sounds of bees along with sounds of marching to signify the power and ominous presence of the body politic. [Notes courtesy of National Ballet of Canada. For more information, visit PNB.org.]

Subject to availability, tickets are also available 90 minutes prior to showtimes at McCaw Hall.

Discounts are available for groups of 10 or more. For group tickets, please call Group Sales Manager Julie Jamieson at 206.441.2416, email JulieJ@PNB.org or use PNB’s online contact form at PNB.org/Season/Group-Tickets.

The Pointe is PNB’s exclusive mailing list for ballet fans between the ages of 20 and 40. Members of The Pointe receive information about special events and flash sales just for them. Born between 1978 and 1998? Visit PNB.org/ThePointe for more information and to sign up.

PNB is a proud participant of TeenTix. Originally founded by Seattle Center, TeenTix’s members (13 to 19 years old) can purchase tickets to PNB and other music, dance, theater and arts events around town for only $5. To join TeenTix or view a list of participating organizations, visit TeenTix.org.

Subject to availability, half-price rush tickets for students and senior citizens (65+) may be purchased in-person with ID, from 90 minutes prior to show time at the McCaw Hall box office.

Artistic Director Peter Boal and PNB’s ballet masters discuss the season’s works, what makes them contemporary, the diversity of styles, and the multiple demands on dancers and staff in preparing new work. This is the third of a four-part series exploring a range of topics, from ballet terminology, steps and partnering, to casting, contemporary works, and the business of ballet. Tickets are $25 per session. For more info, visit PNB.org.

Join Audience Education Manager Doug Fullington for a 30-minute introduction to each performance, including discussions of choreography, music, history, design and the process of bringing ballet to the stage. One hour before performances. FREE for ticketholders.

Skip the post-show traffic and enjoy a Q&A with Artistic Director Peter Boal and PNB dancers, immediately following each performance. FREE for ticketholders.

Friday, April 20, 2015, 7:30 pm
Join members of PNB’s Young Patrons Circle (YPC) in an exclusive lounge for complimentary wine and coffee before the show and at intermission. YPC is PNB’s social and educational group for ballet patrons ages 21 through 39. YPC members save up to 40% off their tickets. For more info, visit PNB.org/YPC.

Alejandro Cerrudo was born in Madrid, Spain, and trained at the Real Conservatorio Profesional de Danza de Madrid. His professional career began in 1998 and included work with Victor Ullate Ballet, Stuttgart Ballet, and Nederlands Dans Theater 2. Mr. Cerrudo joined Hubbard Street Dance Chicago in 2005, was named choreographic fellow in 2008, and became the company’s first resident choreographer in 2009. His thirteen works for Hubbard Street include collaborations with the Chicago Symphony Orchestra and Nederlands Dans Theatre. In March 2012, PNB invited Mr. Cerrudo to choreograph his first work for the company, Memory Glow, upon receiving the Joyce Theater Foundation’s second Rudolf Nureyev Prize for New Dance. Additional honors include an award from the Boomerang Fund for Artists (2011) and a Prince Prize, from the Prince Charitable Trusts (2012), for his first full-length, One Thousand Pieces. Mr. Cerrudo is one of four choreographers invited by New York City Ballet principal Wendy Whelan to create and perform original duets for “Restless Creature,” and in 2014, he was announced the 2014 USA Donnelley Fellow by United States Artists.

Shinji Eshima (Composer, RAkU), born in Berkeley and a graduate of Stanford and Juilliard, is a double-bassist in the SF Ballet Orchestra (SFBO) and San Francisco Opera Orchestra. He is a faculty member at San Francisco State University and San Francisco Conservatory of Music. His compositions include music for theater, film, chamber music, opera, and Buddhist hymns. His first commission for SF Ballet, Possokhov’s RAkU, was recorded by SFBO at Skywalker studio and released on CD and iTunes. In 2011, the city of Berkeley named December 6 as “Shinji Eshima Day” in his honor for his contributions to the arts.

Crystal Pite is a former company member of Ballet British Columbia and William Forsythe’s Ballett Frankfurt. She made her professional choreographic debut in 1990 with Ballet British Columbia, and has since created more than 40 works for companies including Nederlands Dans Theater (where she has been an Associate Artist since 2008), Paris Opera Ballet, the Royal Ballet, Cullberg Ballet, Ballett Frankfurt, the National Ballet of Canada, Les Ballets Jazz de Montréal (where she was Resident Choreographer 2001–04), Cedar Lake Contemporary Ballet, and Louise Lecavalier/Fou glorieux. She is an Associate Dance Artist of Canada’s National Arts Centre and in 2013, was made an Associate Artist of Sadler’s Wells.

Ms. Pite formed her company Kidd Pivot in 2002. Incorporating movement, original music, text, and rich visual design, Kidd Pivot’s distinct choreographic language is marked by a strong theatrical sensibility and a keen sense of wit and invention. The company has won international acclaim with such works as Dark Matters, Lost Action, The You Show, The Tempest Replica, and Betroffenheit. Ms. Pite’s many awards include the Dora Mavor Moore Award (2009, 2012), a Jessie Richardson Theatre Award (2006), the 2008 Governor General of Canada’s Performing Arts Award, the 2011 Jacob’s Pillow Dance Award, the inaugural Lola Award in 2012, Canada Council’s 2012 Jacqueline Lemieux Prize, two Olivier Awards (2015 for Polaris, and 2017 for Betroffenheit, and the 2017 Benois de la Danse for The Seasons’ Canon.