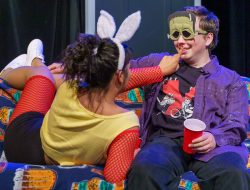 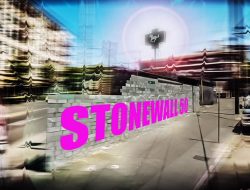 Review: “Blackbird” Tackles The Complex Ambiguity Of A Taboo Subject Review: BLACKBIRD by David Harrower. Produced by White Rabbits, Inc & Libby Barnard in association with 18th & Union. Directed by Paul Budraitis. With Libby Barnard and Shawn Belyea. Onstage at 18th & Union from May 31 to June 15, 2019.

David Harrower’s acclaimed 2005 play Blackbird finally makes its Seattle debut in an intimate production at the 18th & Union theater and independently produced by actors Nik Doner (under his production company “White Rabbits Inc) and Libby Barnard who co-stars here as half of the a very conflicted couple.

(And, here is a good point to issue a trigger warning since Blackbird deals explicitly with issues of sexual abuse of minors; if that topic is problematic for you, it’s best to stop reading now, although the language here isn’t overly explicit with description. Also: this might not be the play for you if this subject is difficult for you to discuss.)

She’s “Una” a 27 year old British woman who has spent the last 15 years of her life trying to deal with the after effects of a problematic relationship she had when she was 12…with a 40 year old man.

That man, is Ray who was 40 when he had the illegal relationship and is now 55 and living a new life, under a new name in a city several hours away from where Una has lived her entire life. She has seen his photo in a magazine and empowered by a wealth of emotions that include rage, guilt and even longing, tracks him down to confront him in the rundown employee lounge of the company where Ray now works. She hasn’t seen Ray for 15 years and she has a lot of pent up emotions she was never allowed to deal with…and, she’s ready to confront them with Ray and demand answers to what happened between them.

And, for some of you reading this, you’re already checking out because Blackbird is a story of rape and abuse but it’s also an ambiguous story of rape, abuse and illicit relationships where both parties involved have culpability in what happened….and, that’s not something that some people can believe, or be a witness to. But, Blackbird tackles a grey area of sexual abuse or statutory rape, which is what Ray is charged with in the play…Una freely admits (and apparently did so at Ray’s trial) that even though she was 12, she did knowingly pursue Ray…she claims she loved him.

Which doesn’t excuse Ray…adults shouldn’t have sex with 12 year olds and Ray crossed that line, and according to him, did so with trepidation. His line of defense was basically he was in a bad place at that time of his life and he was foolish and weak and emotionally drawn to Una, an unhappy 12 year old seeking her own place in the world. And, Ray makes it clear that the affair with Una was a one time thing; in other words, Ray wants it known that he isn’t a predator, a serial pedophile only attracted to sex with young girls. The court evidently believed him since he was charged with the lesser charge of statutory rape and had a relatively light sentence.

But, the part of the power of this play is, again, in its ambiguity. Is Ray telling the truth about what happened 15 years before? Has he moved on from it? Also: What are Una’s real motives for this confrontation? Why is she really here and why is Ray allowing this interaction to happen? Harrower’s play doesn’t explicitly raise these questions, but they are ones raised in your head as you experience Ray and Una’s encounter over the roughly 100 minutes of this play. And, then there’s a bit of a surprise at the end of the play that makes you question everything you had thought up to that point in the narrative. It raises or rather, re-raises questions we’ve been thinking throughout the play.

And, that, to me, is largely the strength of the play and this production. The ambiguity and the subtext of this relationship between these two people, no matter how repellent you might think it, is a fascinating one and Harrower’s great skill with that subtext only enhances the power of the words spoken. The pair of characters each have long fascinating monologues about their relationship and what happened all those years ago, and the power of that storytelling is mesmerizing. Blackbird is a strong piece of dramatic literature regardless if you approve or disapprove of its subject matter.

And, this specific production does a solid job with Harrower’s excellent script. It’s in the barebones 18th & Union space with its oddly long staging area but the play is set within a blandly generic employee lounge so it works for the setting. Director Paul Budraitis has done a good job of moving these two characters around this box they’re trapped in…there’s not a need for a lot of movement here; the words in the stories the characters are telling provide all the movement we need.

And, both Libby Barnard, as Una and Shawn Belyea as Ray are excellent at telling their respective stories. They both have challenging roles to portray; Ray is, after all, a convicted child abuser but he’s also, at times, a likable sad sack. And, as for Una…she isn’t always a very sympathetic character. She’s not your stereotypical “victim”; she still proclaims her feelings for the man who raped her. There are times here where you feel sorry for Ray…after all, she’s the one who has invaded HIS space to confront him, against his will, which can certainly be seen as a flip from your usual rape scenario.

Again…ambiguity. The grey areas in a story, where morality and reality and human nature all collide and collude with one another can be very tantalizing in a play. Certainly more realistically dramatic than traditional “Good Guy/Bad Guy” forms of storytelling.

Watching these two actors try to come to terms with what has happened to the characters is fascinating and I enjoyed both performances.  I really only have one “gripe” about this production and these performances and it’s one I don’t really like to bring up since there’s another theater writer in town who tends to needlessly/endlessly harp on it, but I do have to comment that both actors do seem to struggle a bit with the regional British accents…which ARE tough to do. A lot of actors can bluff their way through toffy voiced upper class twits or adorably ragamuffin Cockneys but mastering any of the various regional accents of Britain can be tricky. It doesn’t derail the production but is something you might notice.

Blackbird is a beautifully written play and this compelling production is worth your time to check out (for the discerning serious dramatic theater fan). Bravo for these theater creators to finally produce it in Seattle while questioning why it’s taken so long for it to get staged here…considering some of the dreary muck so many theaters have insisted on producing over the years…