They also invite you to join them for their big June 7th event, TOGETHER FOR JUSTICE AND EQUITY to discuss future planning for LGBTQ civil rights actions.

Though short, this legislative session has been one of the best for LGBTQ progress in Washington State in many years. Thank you to the countless community members, volunteers, legislators, lobbyists, activists, and allies who have contributed time and treasure to support this work. We continue to be honored to work beside you to build a more equitable Washington State.

SB 5722 – Conversion Therapy Ban for Minors
In January, the Williams Institute released a research study that stated “An estimated 20,000 LGBT youth in the U.S. ages 13 to 17 will receive conversion therapy from a licensed health care professional before the age of 18.” After five years of work, Washington will become the tenth state to ban conversion therapy for minors. Nearly every major medical professional association has decried the practice as harmful and ineffective. Research shows that youth who are subjected to conversion therapy are more likely to attempt suicide, suffer from depression, and consume drugs or alcohol. SB 5722 is a critical step in helping to support and protect LGBTQ youth. 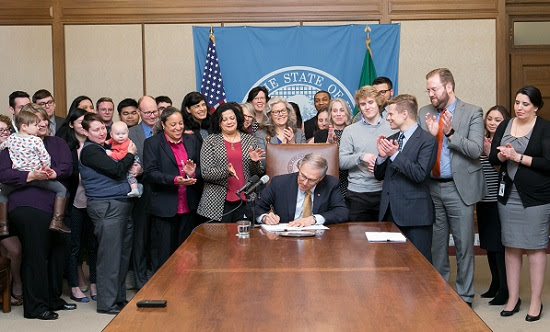 Washington State became the first in the nation to adopt the updated Uniform Parentage Act. The updated standards ensure equal treatment of children born to same-sex couples, provides pathways and independent legal protections for compensated surrogacy, and eliminates the need for second parent adoption for non-biological parents at birth. SB 6037 is a huge win for those in Washington State seeking to begin or grow their families.

Initiative 940 – De-Escalate Washington
As a member of the De-Escalate Washington Leadership Team, Equal Rights Washington is remarkably proud of the coalition that came together to enact Initiative 940 into law this session. I-940 will modernize Washington’s use of force law by calling for more police training in de-escalation and mental health; requiring that first aid be provided at the scene; mandating completely independent investigations in use of force cases; and removing the de facto immunity by striking “malice” and requiring an objective “good faith” standard for use of deadly force.

The legislative hearing for this work was moving and impactful, and illustrated the importance of passing I-940 quickly so that we could all come together to begin the work on implementation https://www.tvw.org/watch/?eventID=2018021269.

The Work Ahead
Though a great session, now we must turn towards the work of supporting education and implementation of the bills passed above. We have also already begun to outline our legislative plan for 2019. To celebrate our current wins and hear more about what’s next, please join us at this year’s Together for Justice and Equity event. Working together we will build the future we want to see for Washington State.