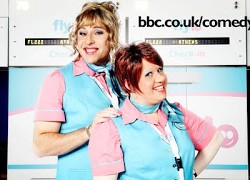 The Little Britain Boys are Back with a NEW...

Pee Wee conquered Broadway; next year he comes to HBO! Gee, how many acts does Paul Reubens/Pee Wee Herman have to his career? Fringe L.A. theater led to HBO special led to Tim Burton movie led to Saturday morning hipster/kid TV show led to scandal in the porno theater led to slow resurrection working as character actor led to Pee Wee revival last year led to successful Broadway run led to new HBO production of that theater show. The Broadway run closes January 2 and the show will be filmed soon after for a 2011 broadcast on HBO, (no date set) to be directed by Marty Callner who also directed Pee Wee’s original HBO special back in 1981.

Yikes! Pee Wee Herman has been around for THIRTY YEARS! Granted, I was only 5 years old when that show originally aired, (cough, cough) but still…that makes me feel very old,

As for Pee Wee/Paul Reubens, I guess the Secret Word for Today is COMEBACK!