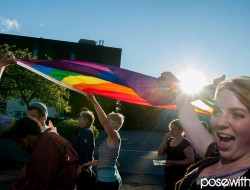 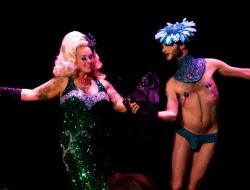 So. Much. To. Do….Bacon Strip’s Pride Pageant! A Midsummer Night’s Fantasy! Pride Shabbat! And, MORE! The next 10 Days of MADNESS kicks off TODAY/TONIGHT (Friday, June 19) as we begin a week of Seattle Pride Week Insanity with more events than you can shake a bottom at!!! Not all of them are strictly Pride related but does that really matter? The fact is, there’s a LOT of stuff going on. Choose wisely!

We’ve already mentioned Julie Goldman headlining at Seattle Women’s Pride at Q Night Club…ooops! We just mentioned it again! Do I get an extra cookie?

Even Sylvia O’ Stayformore is jumping on the Pride bandwagon with this month’s BACON STRIP, her big Gay Variety Show down in the I.D. at Theatre Off Jackson. Since naughty Sylvia will be out of town for Pride Weekend next week (thus, not hosting the Parade like she’s done for the last 32 years) due to her attendance at her parent’s 88th wedding anniversary, (we assume it’s the 88th since Sylvia herself is 87 years old and comes from Good Christian Stock despite her own sinful lifestyle), she’s throwing a big Bacon-y shindig THIS weekend for TWO nights, tonight and tomorrow (Saturday, June 20). Here’s the poo on her Drag Pageant!

Sylvia is breaking the norm and starting a tradition: Gay “herstory” pageants. She is celebrating drag history in pride by visiting how drag queens and fringe performers have always been there to move forward the rights LGBTQ people and allies. Always the radicals, delinquents, queers, queens, femmes, sissies, crazies we have always found a reason to be gay and joyous. Come join the Bacon Strip Family as we pay tribute to the progression of pride through the eyes of Drag!

Yes, it’s EARLIER than usual, so you can still go out and boogie AFTER the show!
Yes, it’s still 21+ with ID, so leave the brats at home!!!! Oh, and be on the lookout for us tonight on Capitol Hill. We’ll be out and about filming with MAMA TITS for a fun new web video project! Mama T. will be on the Mean Streets of Seattle interviewing folks about Pride!

Hopefully, hordes of thuggish Amazon employees don’t try to beat us up.