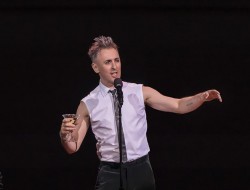 NBC Universal seems to have created a new holiday tradition with their annual live productions of beloved musicals. It started in 2013 with The Sound of Music, followed by 2014’s Peter Pan. Both got big ratings but mixed reviews with some critics complaining that NBC’s choices were a bit old fashioned. Some speculated it was an attempt to honor the live stage telecasts of the 1950s where annual broadcasts of Peter Pan were a beloved tradition.

Last December’s broadcast of The Wiz changed the conversation with both critics and audiences loving the freshness of the staging and the energy of its cast. NBC quickly announced that its 2016 choice for a live telecast would be a production of a fairly recent show…Hairspray, the mega hit 2002 musicalization of the John Waters written/directed 1988 original film that starred drag icon, Divine. The Broadway musical was later turned into a film itself, in 2007 that starred John Travolta.

Over the weekend, it broke that NBC Universal was sending out a casting call for an unknown actress to play the role of Tracy Turnblad, the chubby, dance crazed Baltimore teen and central character of the show.

But, for the other big roles, NBC Universal is going with stars. There had been speculation that John Travolta might be wooed to reprise his role as Edna Turnblad, the traditionally “drag” cast role that was originated by Divine in the first film, but in the end, the studio went with the OTHER proven name in that iconic role: multiple Tony Award winning actor/writer HARVEY FIERSTEIN will reprise the role he originated (in Seattle at the 5th Avenue Theater followed by Broadway) which won him one of his many Tony Awards. Fierstein will also pen a new script for this production, based on the Broadway libretto by Mark O’Donnell and Thomas Meehan, which was in turn based on the original screenplay by John Waters.

The other big name announced: Oscar/Grammy winner JENNIFER HUDSON will play Motormouth Mabel, a dj and record shop owner who has a major supporting role in the story. Hudson is currently starring on Broadway in the revival of The Color Purple where she plays Shug Avery. Her casting is interesting….Motormouth is the mother of a teenaged character in the show; Hudson is currently 34 years old. Legendary blues/r&b singer Ruth Brown originated the role in the Waters’ film; Queen Latifah played the role in the movie musical.

It’s likely NBC Universal will eventually announce a few other “name” actors that will be cast in other roles.

Unlike the first three “Live” musicals which were all done in New York, “Hairspray Live” will be produced in Los Angeles.  The live airdate is Wednesday, December 7, 2016.

Also joining the creative team will be acclaimed television director Alex Rudzinski, who received extraordinary reviews for his television direction of “Grease Live!” Rudzinski was also the TV director for “Dancing With the Stars” from 2005-14.

“We are beyond thrilled with this incredibly talented duo of stars for ‘Hairspray Live!,’” said Robert Greenblatt, Chairman, NBC Entertainment. “Harvey Fierstein created the role of Edna Turnblad on Broadway in an indelible Tony-winning performance that demanded to be memorialized on film, and we’re happy he wanted to step into her shoes one last, unforgettable time. We’re also so grateful that the incomparable Jennifer Hudson will play Motormouth Maybelle and we know her rendition of ‘I Know Where I’ve Been’ will literally stop the show.”

Based on the Tony Award-winning Broadway musical, “Hairspray Live!” takes place in 1962 Baltimore. Teenager Tracy Turnblad’s dream is to dance on “The Corny Collins Show,” a local TV program. When, against all odds, Tracy wins a role on the show, she becomes a celebrity overnight and meets a colorful array of characters, including the resident dreamboat, Link; the ambitious mean girl, Amber; an African-American boy she meets in detention, Seaweed; and his mother, Motormouth Maybelle, the owner of a local record store. Tracy’s mother is the indomitable Edna Turnblad, and she eventually encourages Tracy on her campaign to integrate the all-white “Corny Collins Show.”

Harvey Fierstein, who is also writing the teleplay, will play Edna Turnblad, a role he created and won a Tony Award for in the stage version of “Hairspray.” The quintessential Edna, Fierstein portrayed the character for the show’s first two years of its seven-year run at the Neil Simon Theatre on Broadway.

As an actor, he is a member of an elite group who have won Tonys as Best Actor in a Musical (“Hairspray”) and Best Actor in a Play (for his own “Torch Song Trilogy”). As a writer, Fierstein won Tonys for “La Cage Aux Folles” and “Torch Song Trilogy,” and received three more Tony nominations for writing “Kinky Boots,” ”Newsies” and ”Casa Valentina.” His adaptation of “Funny Girl” is currently running, along with “Kinky Boots,” in London.

Hudson, who will play Motormouth Maybelle, is currently completing a triumphant run in the acclaimed revival of “The Color Purple” — performing the role of Shug Avery in her Broadway debut. She won an Oscar and Golden Globe in 2007 for her iconic performance as Effie White in the hit film “Dreamgirls.” Her sensational rendition of the song “And I Am Telling You I’m Not Going” was greeted with instant acclaim by film critics and moviegoers alike and made Hudson the person to beat as best supporting actress for the Academy Awards.

Hudson’s incredible vocal talents were first recognized with her appearance on the third season of “American Idol” in 2004, where she impressed both the show’s judges and a national TV audience. Soon after, she released her first album, “Jennifer Hudson,” which debuted at #2 on the Billboard 200 Chart and sold more than 500,000 copies in the U.S. through the first six weeks. The album was nominated for four Grammys and won for best R&B album.

Hudson continued on the bigscreen following “Dreamgirls” and has since co-starred in such films as “Sex and the City,” “The Secret Life of Bees” and Spike Lee’s latest film, “Chi-Raq.” Her TV credits include NBC’s “Smash,” Fox’s “Empire” and HBO’s newest telepic, “Confirmation.”

“Hairspray Live!” reunites Hudson with executive producers Craig Zadan and Neil Meron, who worked with her previously on NBC’s “Smash” and the 85th and 87th Oscar telecasts, which they also produced.

Television director Alex Rudzinski will join stage director Kenny Leon (“The Wiz Live!”). Craig Zadan and Neil Meron (the upcoming “A Few Good Men Live!”) serve as executive producers of “Hairspray Live!” Harvey Fierstein will provide a new teleplay and Jerry Mitchell (“Kinky Boots,” “On Your Feet”) will serve as choreographer for the live production with music and lyrics by Marc Shaiman and Scott Wittman (“Smash” and Broadway’s upcoming “Charlie and the Chocolate Factory”).

“Hairspray Live!” will air Wednesday, Dec. 7 at 8 p.m. ET/PT and will originate from Los Angeles.