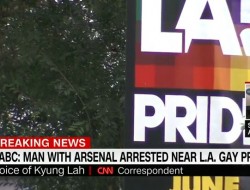 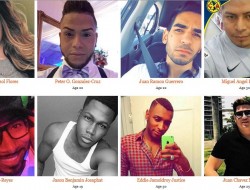 A couple comfort one another in the crowd of community members honoring the 49 victims of the Orlando Pulse Nightclub Massacre at Seattle’s Cal Anderson Park on Sunday, June 12. Photo: Christopher Zeigler

Well over a thousand mourning members of Seattle’s LGBTQ community and allies gathered at Capitol Hill’s Cal Anderson Park on Sunday evening, June 12, 2016 for a candlelight vigil to honor the victims of the early Sunday morning shooting in Orlando Florida gay nightclub Pulse that left 50 dead and 53 injured, the worse mass shooting by a lone gunman in US history.

The overall theme of the event: “We are Orlando/I am Orlando” chanted by somber community members, many with tear stained faces as Seattle’s queer community and their friends consoled each other over the attack. There were also scattered cries of “Gun Control NOW!” by those angered and frustrated by this country’s lack of effective gun control legislation.

Organized by Pride Foundation, Gender Justice League and the City of Seattle, the moving event included performances from members of Seattle’s Men’s and Women’s Choruses and speeches from Washington State Governor Jay Inslee, Seattle Mayor Ed Murray and various community members including Danni Askini and Sonja Basha, who is Muslim and Queer and moved the crowd with her statement:

“The Muslim community and LGBT community are not separate; we mourn together. I am Muslim, I am queer and I exist.” She repeated those words, as a mantra and asked the crowd to join her in chanting, “I exist.”

Mayor Ed Murray’s opening remarks were well received by the public. His speech, provided by the Office of the Mayor:

“We are gathered on this summer evening during the month we celebrate Pride to share our grief and support each other as we absorb the news of the largest mass shooting in our nation’s history and the largest act of violence against the LGBTQ community in our nation’s history. We gather tonight in solidarity with those who lost their lives, and we offer our support to their families and to the people of the City of Orlando.

“We are also here this evening because the slaughter of our brothers and sisters was meant to spread fear throughout LGBTQ communities across this country. We will, as we have in the past, face this fear. We will not be intimidated. We will stand strong. We will stand together as a community. The mostly young people in that club were doing something very important: they were out, they were living their joyous lives, they were not afraid.

“We cannot be surprised, but still we are shocked and shaken in our pain and anger and disbelief. And as we learn the stories of those who lost their lives and those who tried to help them, this pain will only grow deeper and the anger greater and the disbelief more profound in the days ahead. As difficult as all this is, we cannot give in to despair.

“The greatest way we can honor those whose lives were lost is to recommit ourselves to hope, to that promise that someday being LGBTQ and out at a club is not an act of bravery — because gone is the threat that it might end in slaughter because of who you are.

“To young people in particular, I urge you, despite this tragedy, not to give in to the sense that nothing can be done. Instead, I ask you to engage like never before. Our community looks to you, more than ever, to build on the gains that we’ve made and to offer a future of hope.

“Along with the Council, with Chief O’Toole, and the men and women of the Seattle Police Department, I promise that this City will do all we can in free society to prevent a tragedy like this from occurring in our community.

“As we leave here, the sun will set and night will fall. Some of us will pray, some will hold their loved ones closest, some will redouble their commitment to the movement, some will do all of these things.  All of us will find ways to make sure those who were murdered in the early hours of this morning did not die in vain. We will live in hope and not fear, we will find ways to bridge what divides us.

“Finally when night falls and we think of those who lost their lives, think of the words I will now paraphrase from Shakespeare’s Romeo and Juliet:

And when they shall die,

Take them and cut them out in little stars,

And they will make the face of heaven so fine

That all the world will be in love with night

And pay no worship to the garish sun. “We are Orlando” was a predominate theme at the Sunday night memorial and vigil for the victims of the Orlando Pulse Massacre. Photo: Christopher Zeigler

Both Murray and Seattle Police Chief Kathleen O’Toole have vowed that additional security would be provided for Seattle’s Pride events which happen the weekend of June 25/26.

Numerous upcoming Pride weekend events have started announcing that they will donate funds to the families of Orlando Pulse victims. The Gender Blender Party at Neumos on Friday, June 24 will add Orlando/Pulse as its secondary beneficiary to the already announced Gay City. And, Mama Tits (called “Mama T” on TV) appeared on KING TV’s morning news show earlier today and announced that 100% of proceeds to her Pride Friday event “BFD Takeover” at The Unicorn will go to Orlando/Pulse.

Meanwhile, the investigation continues in Orlando. The last of the victims have been removed from the scene of the massacre and as families are notified, the City of Orlando is releasing the names of the victims, the majority of them being members of Orlando’s vibrant Latino/Latina LGBTQ community.