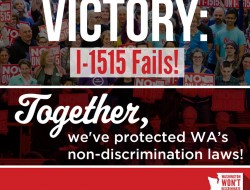 Washington DOESN’T Discriminate As I-1515 Fails To Make November... 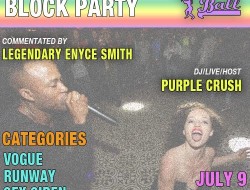 Playwright Robert O’Hara is a faculty member for Lambda Literary’s Writers Retreat for Emerging LGBTQ Voices in Los Angeles from July 24 to 31, 2016.

Our hometown corporate giant, Amazon.com and more specifically, its Amazon Literary Partnership has announced its support of Lambda Literary’s Writers Retreat with a $30,000 grant for the retreat to be held in Los Angeles, California later this month. The week long retreat gives emerging LGBTQ writers a chance to work on their writing in an intense week of mentoring and networking. Faculty for this year’s retreat will include acclaimed novelist Andrew Holleran, known for his seminal AIDS novel Dancer From The Dance and playwright Robert O’Hara, whose major work Bootycandy had a well received production at Seattle’s Intiman Festival last summer.

Los Angeles, CA – Lambda Literary, the nation’s leading nonprofit organization advancing LGBTQ literature, is pleased to announce a grant of $30,000 from the Amazon Literary Partnership for a seventh year in a row, a continuation of Amazon’s support for the Writers Retreat for Emerging LGBTQ Voices. This year’s Retreat will be held July 24th through July 31st, 2016 on the campus of the University of Southern California (USC) in Los Angeles.

Lambda Literary’s Writers Retreat is the only residency in the world established specifically for talented, emerging LGBTQ writers. Since 2007 when the program began, Lambda has graduated over 350 Fellows from its summer Retreat. For one rigorous, immersive week, Retreat students in fiction, genre fiction, nonfiction, poetry and playwriting work on their manuscripts or plays in small, individualized classes, gain mentorships, forge critical connections to publishing industry professionals, and build a community of peers on whom they’ll depend for years of encouragement, inspiration and friendship.

“Amazon is thrilled to continue its support for Lambda’s one-of-a-kind retreat, which offers talented LGBTQ writers a rare opportunity to receive rigorous mentoring from some of the finest writers working today,” said Neal Thompson, Amazon’s director of Author and Publishing Relations. “It’s vital these days to make sure literary LGBTQ voices get heard. And the Lambda retreat does more than help emerging writers tell their stories, it develops writers’ careers.”

Amazon’s $30,000 grant is a significant contribution to the mission of Lambda Literary. As in years past, the grant will enable promising emerging writers to participate through scholarship funds. Without a scholarship, many students would not otherwise be able to attend the Retreat in Los Angeles. Amazon’s support ensures that these talented writers can take their spot in a workshop.

The Writers Retreat provides an unparalleled opportunity to learn from the very best writers in the LGBTQ community. This year’s main faculty:

Andrew Holleran (Fiction) is the author of Dancer From the Dance, a novel about pre-AIDS New York, and, most recently, Grief, a novella set in post-AIDS Washington, D.C. An original member of The Violet Quill, he has written two other novels, a book of stories, and a collection of essays about AIDS. For the past decade, he has been teaching Creative Writing at American University in Washington and currently writes for The Gay and Lesbian Review.

Joy Ladin (Poetry) is the author of seven books of poetry, including recently-published Impersonation, Lambda Literary Award finalist Transmigration, and Forward Fives award winner Coming to Life. Her memoir of gender transition, Through the Door of Life, was a 2012 National Jewish Book Award finalist. Her poetry has appeared in many publications, including American Poetry Review. and she has spoken about gender identity issues around the country, and was featured on NPR’s “On Being” with Krista Tippett and other NPR programs. She holds the David and Ruth Gottesman Chair in English at Stern College of Yeshiva University, and has also taught creative writing at Sarah Lawrence College and the University of Massachusetts (Amherst). Links to her poems and essays are available at joyladin.com.

Robert O’Hara (Playwriting) has received the NAACP Best Director Award, the Helen Hayes Award for Outstanding New Play, 2 OBIEs and the Oppenheimer Award. He directed the World Premieres of Nikkole Salter and Dania Guiria’s In the Continuum, Tarell McCraney’s The Brother/Sister Plays (Part 2), Colman Domingo’s Wild with Happy as well as his own plays, the Lambda Literary Award winning Bootycandy and Insurrection: Holding History. This year his new plays Zombie: The American and Barbecue, has their world premieres at Woolly Mammoth Theater and New York Shakespeare Festival, respectively. He is currently the Mellon Playwright in Residence at Woolly Mammoth Theater.

Benjamin Alire Sáenz (Young Adult Fiction) is an author of poetry and prose for adults and teens. He is the winner of the PEN/Faulkner Award and the American Book Award for his books for adults as well as a Lambda Literary Award for Everything Begins and Ends at the Kentucky Club. Aristotle and Dante Discover the Secrets of the Universe was a Printz Honor Book, the Stonewall Award winner, the Pura Belpre Award winner, the Lambda Literary Award winner, and a finalist for the Amelia Elizabeth Walden Award. His first novel for teens, Sammy and Juliana in Hollywood, was an ALA Top Ten Book for Young Adults and a finalist for the Los Angeles Times Book Prize. His second book for teens, He Forgot to Say Goodbye, won the Tomás Rivera Mexican American Children’s Book Award, the Southwest Book Award, and was named a New York Public Library Book for the Teen Age. He teaches creative writing at the University of Texas, El Paso.

Sarah Schulman (Nonfiction) is a novelist, nonfiction writer, playwright, screenwriter and AIDS historian. Her most recent books include the novel The Cosmopolitans and the forthcoming Conflict is Not Abuse: Overstating Harm, Community Responsibility and The Duty of Repair. Her other nonfiction titles are Israel/Palestine and the Queer International, The Gentrification of the Mind: Witness to a Lost Imagination, Ties That Bind: Familial Homophobia and Its Consequences, Stagestruck: Theater, AIDS, and the Marketing of Gay America, and My American History: Lesbian and Gay Life During the Reagan/Bush Years.

Distinguished guest faculty, whose names will be announced at a later date, will also present workshops and lectures.

And, for our Los Angeles based readers, a number of public events/readings will occur during the Retreat . Go HERE for a schedule.