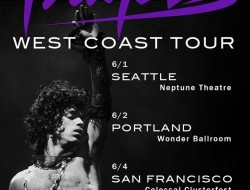 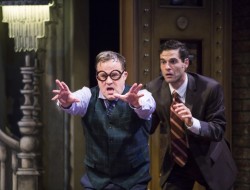 Elohim made her Seattle debut at Chop Suey last Wednesday night to an enthusiastic group of fans of whom many were overheard speaking about their excitement to see her. Elohim did not disappoint them and gave an entertaining and thoughtful show.  The show was compact, but she had excellent timing, smooth transitions between songs, and overall, the experience was satisfying and rejuvenating. I would highly recommend anyone of any age to go see Elohim if you get the chance.

Using an aggressive light show, video projection of fluid imagery and blinking block text, an electronic speaking voice, and tons of synthesized equipment, Elohim delivered a story about love, loss, panic, fear, gratitude, and joy. Surprisingly, she added a hip-hop emphasis which possibly indicates her next directions as an artist who produces her own work. She played two new songs that night which I absolutely loved and can’t wait to hear when they come out. Occasionally, she would come out from her synthesized equipment and touch hands from fans who were reaching out. The energy between her and her audience was magical to witness. She hides behind her hair and black sunglasses. She hides behind her oversized clothes. But she’s not really hiding.  She’s letting her craft of music speak for itself. Her physical expressions and gestures were just as much a part of the story as her music. She took us somewhere.  She was practiced and methodical in her execution, but employed a variety of techniques from which to communicate, other than what she looks like and what her speaking voice sounds like. She shared her journey with anxiety and depression and was able to both create a sense of what those aspects feel like, and create a space that felt safe to do so. Elohim exhibited, through her performance, a sense of nurturing threaded through every song. I brought a friend along with me to see her show and he suffers from social anxiety.  Just coming to the show took some effort, so it was special to me to see her addressing him directly, letting him know, “Hey. I do too. Let’s rock,” and rock, we did. What stuck-out to me the most during the show was her smile. Every now and then I would see a clear profile of her face and every time she was grinning hard, from ear-to-ear. Her smile was infectious. Her smile was her gratitude. She might have been smiling because of the amazing reception she received. The energy I got from her smile was pure, unadulterated joy. Like beams from the sun, her smile felt warm and alive. I’m the kind of music fan who loves to discover an emerging artist and watch them grow to amazing heights. I have really high expectations for Elohim and if you’re like me, you’ll want to catch on to her now. If you missed her this time, don’t worry, I’m sure she’ll be back soon. When she is, I’ll definitely come back and watch again.

On a side note, the new Chop Suey is fabulous. They have great seats and a streamlined system for allowing all-ages to be present. The security and staff were focused and efficient. I would also recommend anyone to go see a show there.