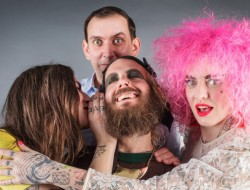 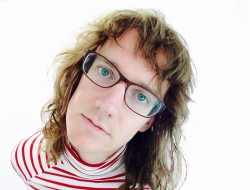 The once popular Queercore duo known as  PWR BTTM is seeing the collapse of their musical career as the allegations that musician/co-founder BEN HOPKINS is guilty of sexual abuse has led to the cancellation of their national tour which was to include a stop at Seattle’s Neumos on July 19th.  Hopkins founded the group in 2013 with their Bard College classmate Liv Bruce and the duo quickly connected with the queer rock/punk/queercore/diy music community and snagged indie record deals and tours. Their latest album Pageant was just released on Polyvinyl Records on May 12 and the group looked poised for even greater success with a big tour and festival dates scheduled.

But, as that album was released last week, Hopkins was accused in a post on the closed Facebook group “DIY Chicago” of:

being ” a known sexual predator” who has perpetrated multiple assaults, bullied other people in the queer community, and has made unwanted advances towards underage minors. “U should avoid going to their shows/boycott their music/not allow them in safe spaces,” the poster, Kitty Cordero-Colin wrote. “I have personally seen Ben initiate inappropriate sexual contact with people despite several ‘nos’ and without warning or consent.”

As word quickly spread through online communities, both music and queer media outlets began picking up the story and the public outrage led to demands that clubs and venues cancel appearances by PWR BTTM. That public pressure led to the group losing the tour and their record deals.

Jezebel also spoke with “Jen” a woman who claims she was assaulted by Ben Hopkins (who uses they/them pronouns).

In an interview with Jezebel, a person we’ll call Jen* who wishes to remain anonymous described being assaulted while intoxicated by Hopkins after a PWR BTTM show last year. Jen said she initially thought they seemed “like an okay person… because of what they preach,” referring to the band’s vocal interest in social justice. After Hopkins took Jen home they allegedly made sexually aggressive advances and started having sex with her without permission while also refusing to wear protection. Later, while she was asleep, Jen said she woke up to Hopkins trying to have sex with her again.

Jen also says Hopkins sent her nude photos and assaulted her again, a month after the initial encounter.

PWR BTTM has denied the accusations and issued a statement last week via their Facebook page:

Unfortunately we live in a culture which trivializes and normalizes violations of consent. There are people who have violated others’ consent and do not know. Ben has not been contacted by any survivor(s) of abuse. These allegations are shocking to us and we take them very seriously. Further, the alleged behavior is not representative of who Ben is and the manner in which they try to conduct themselves.

Hopkins landed in hot water last year after a photo surfaced of them at a bench grinning after apparently drawing a swastika in the sand. Hopkins apologized for the incident and blamed it on “youthful” hijinks.

The PWR BTTM scandal is indicative that we live in a time where online social media can play a very powerful role in the success or failure of any one individual. “Hijinks” and accusations can result in careers and lives destroyed even without legal prosecution or court trials.