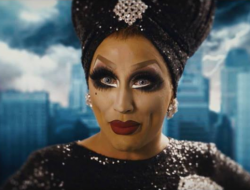 The film, “The Bookshop” will open the 44th annual Seattle International Film Festival on Thursday, May 17, 2018

One is the fancy Red Carpet Experience and includes all sorts of special treats/add ons or there’s the General Admission option.

More detail below. The rest of this year’s festival will kick off into high gear on Friday with screenings all over the metro area for the next three + weeks until June 10th!

There’s dozens of films and events to see including 32 LGBTQ offerings! More details in the weeks ahead!

Spanish director Isabel Coixet heads to the English coast circa 1959, where a headstrong widow (Emily Mortimer) opens a bookstore in a sleepy village and encounters both pride and prejudice from the provincial locals. Winner of Best Film, Director, and Screenplay at Spain’s Goya Awards.

“Its subversive undercurrent, embodied in fine performances by Emily Mortimer and Bill Nighy, is what makes it really interesting.” Jonathan Holland – The Hollywood Reporter

Start the Festival right by attending the Opening Night Gala, the best party of the year, at Marion Oliver McCaw Hall. The kick-off event is always a fabulous time, with hors d’oeuvres, desserts, and cocktails immediately following the screening.

Red Carpet Experience: $275 Members/Non-Members
Includes admission to the film with valet parking, reserved section seating, a premium gift bag, entry to the Opening Night Party, and unlimited drinks. *This is a fundraiser for SIFF*

Get the Red Carpet Experience

Who thought opening a bookstore would be so difficult, catering to small-town conservative British folks who aren’t too enthusiastic about reading? Set in 1959, Isabel Coixet’s The Bookshop centers on Florence Green (Emily Mortimer), a  widow who decides to open a bookstore in the town of Hardborough, Suffolk. The location of the shop is an old abandoned house that local bigwig Violet Gamart (Patricia Clarkson, ice-cold and endlessly calculating) wants to turn into an arts center. Despite the mild-mannered but ruthless opposition she faces from Violet and other stubborn townsfolk, Florence presses on with her underdog business, also striking up a friendship with the local recluse Mr. Brundish (the delightful Bill Nighy), who becomes her best client. Restrained but quietly subversive and bolstered by strong lead performances, The Bookshop is a melancholic celebration of bibliophilia, based on Penelope Fitzgerald’s 1978 novel of the same name, with a strong resonance of the world today, suggesating that a world without books is a nasty place to live.

Isabel Coixet has directed 12 films since the start of her career in 1988, making her one of the most prolific filmmakers in contemporary Spanish cinema. Coixet studied 18th and 19th century history at the University of Barcelona before briefly working in advertising and copywriting. Her first feature, Demasiado viego para morir joven (1989) earned her a Goya Award nomination for Best New Director.