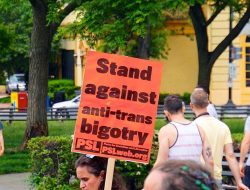 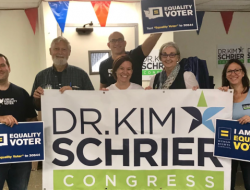 Canvas With Dr. Kim Schrier and HRC to Take... Since Halloween is midweek this year (next Wednesday) there’s a whole week’s worth of spooky partying going on with much of it centered on this weekend, Friday and Saturday the 26th and 27th (but there’s fun stuff from now until the Big Day itself, too!)

Find out all the fun events/parties ranging from family friendly to down & dirty over at the SGS Calendar, HERE!

Some of the highlights for Friday & Saturday include:

NUT OF THE LIVING DEAD @ THE SEATTLE EAGLE with your zexy host Strawberry Shartcake: (The name of this event makes us giggle)

SLAY: A Hip Hop Party for LGBT, and People of Color @ Chop Suey: The monthly hip hop party is back for Halloween Weekend! Night Of The Living and The Dead Halloween Bash! @ Clock-Out Lounge/Beacon Hill: Not specifically an LGBTQ event, but everyone is welcome at all events at this fun lounge/pizza joint on Beacon Hill!

HalloQueen: A Royal Ball @ The Backyard in Columbia City: More proof the South Side is embracing LGBTQ culture. The Backyard is hosting another queer friendly party in time for Halloween.

HER Seattle Party: Dark Magic @ Ora Seattle (2330 1st Avenue) in Belltown: FINALLY a Halloween Party for Womxyn hosted by the all femme social app HER. Her-She’s Chocolate: Bite of the Scorpion @ Clock-Out Lounge: OMG! Another QTPOC event! A few years ago, if you were any combo of black/brown/poc, queer/gay, trans/nonbinary you had like 3 options a year for events. Here’s another fun option back at the Clock-Out on Beacon Hill. Ceremony Halloween @ Re-bar: Ceremony is a beloved club night at alterna favorite Re-bar. It’s not Queer specific but popular with many in the community.

Nightmares The Cuff Halloween Party : The Cuff welcomes a bevy of Drag Divas to Celebrate the Howlidays!